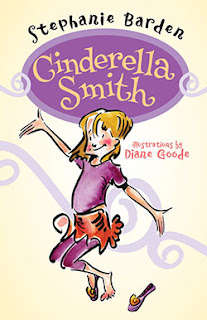 Cinderella Smith didn't get her nickname because she has a wicked stepmother (hers  is "just a regular kind of mom who is usually nice but kind of strict.") or because she has mean stepsisters (Tess, her younger sister, is a sweetheart) or because she sleeps next to an ashy fireplace or because she has tons of chores to do. No, Cinderella earned her name because she's always losing shoes. In the course of the story, she misplaces half-a-dozen. Most find their way back to her, except for the one she needs most of all--her brand-new ruby red tap shoe. Without it, she won't be able to dance the coveted lead part of Pumpkin Blossom Fairy in the Autumn Recital.

Luckily, this Cinderella, unlike her fairy-tale namesake, has plenty of pluck, and doesn't require a fairy godmother to solve her problems. Instead she teams up with the new girl in school, Erin, who has her own worries. Her mother is remarrying and she's getting two stepsisters. Will they be mean or nice? Cinderella is all set to help her new friend find out.

First-time author Stephanie Barden successfully juggles both plot lines, putting her young heroine into one scrape after another. Diane Goode's wriggly line drawings capture Cinderella's bouncy, exuberant personality to a tee. A second book, Cinderella Smith and the More the Merrier, will come out next year. Yippee!