On a Beam of Light 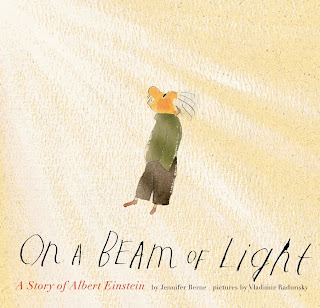 I wouldn't have thought Albert Einstein, poster boy for the word genius, a good candidate for a picture book biography. How could the life of the creator of E = mc2 be crammed into a few pages of text? Well, happily, Jennifer Berne has proven me wrong. Her biography, aimed at young readers between ages 6 to 9, is a masterful condensation of big ideas into clear and accessible prose.

The book begins, appropriately, with the universe: "Over 100 years ago, as the stars swirled in the sky, as the Earth circled the sun, as the March winds blew through a little town by the river, a baby boy was born. His parents named him Albert."

The text then follows him through his childhood (puzzling the secrets of the universe) to adulthood (still puzzling the secrets of the universe). We see young Albert mystified and enchanted by the workings of a compass and later wondering what it would be like to ride his bike on a beam of sunlight. As an adult, he watches sugar dissolve in his tea and pipe smoke vanish into the air and questions how one thing could disappear into another. By focusing on such concrete everyday examples, Berne grounds Einstein's remarkable abstract discoveries into things a child can comprehend.

Radunsky's innovated illustrations cast Einstein as a wide-eyed free spirit and allow you to see the child in the old man and vice versa. Through Radunsky's free-flowing hand, Einstein springs to life, striding through these pages as a wild-haired prophet in an endless search for the truth.

For readers eager to learn more, Berne provides an author's note covering other aspects of Einstein's life, such as his playful nature and his lifelong pacifism. A short bibliography is also included.

On a Beam of Light: A Story of Albert Einstein
by Jennifer Berne
illustrations by Vladimir Radunsky
Chronicle, 56 pages
Published: 2013
Posted by Catherine at 10:12 AM No comments:

Email ThisBlogThis!Share to TwitterShare to FacebookShare to Pinterest
Labels: On a Beam of Light: A Story of Albert Einstein; Jennifer Berne; Vladimir Radunsky; picture book biographies 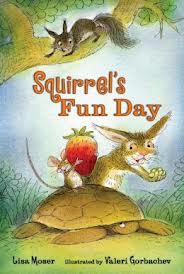 It's a sunny summer afternoon and what am I doing? Sitting in my office writing this post. Why? Because that's my version of a fun day. What's Squirrel's? To play with his friends: Mouse, Turtle, and Rabbit. Trouble is Mouse is busy cleaning. So Squirrel helps, but he makes more of a mess than before. Next he urges a sleepy Turtle off his log and ends up slathering his friend in mud. Finally he convinces Rabbit to alter his routine and poor Rabbit ends up lost. In the final chapter of this easy reader, Squirrel realizes that while he had fun, his friends didn't. Or did they? Sometimes going outside your comfort zone and trying new things can lead to, yes, fun.

Squirrel, a rambunctious fellow with a tendency to repeat himself, makes an engaging character that young readers will identify with and root for. Although he's often clueless, his heart is in the right place and, like many children I've known, he can't contain his exuberance for life. The quartet of friends, each charmingly portrayed, cavort through Gorbachev's idyllic landscape, a forest rendered in soft mossy hues. Reading this pitch-perfect book, the second in a series, beginning readers are sure to have their own fun day.

Joe and Sparky Go to School 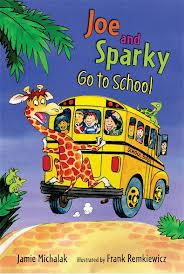 Stories that feature animals in a school setting are always lots of fun, and Joe and Sparky Go to School, I'm happy to report, is no exception. Joe, an inquisitive giraffe, teams up with Sparky, a turtle more interested in sleeping than adventure, to investigate a school bus parked in Safari Land's lot. The bus, filled with "noisy short people" is heading back to school, and when Sparky mistakenly gets whisked away, Joe takes off after him. When the pair arrived at the school, Joe decides a field trip is in order. (Poor Sparky just wants to go home.) Luckily for Joe--and for young readers--Miss Hootie, the teacher, breaks her glasses and never discovers that two zoo animals are among her students. This, of course, provides for more belly laughs as Joe gets into trouble because he's, well, a giraffe. Sparky does much better and by day's end his shell is plastered with gold stars. Don't worry, though. Joe manages to get a star too, in a heartwarming way.

The third in a series, Joe and Sparky Go to School is sure to win over beginning readers. The action moves along at a brisk pace and something to chuckle over happens on nearly every spread. The section in which Joe and Sparky visit the boys' restroom is sure to have kids rolling on the floor! Remkiewicz's cheerful illustrations help reinforce the story line and add to the humor. All in all, this is one easy reader that will have kids eager to go back to school. Who knows? Just maybe a giraffe and his sidekick turtle will visit their class.