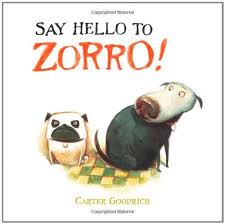 So who's Zorro? He's a bossy pug who moves into Mister Bud's territory, disrupting his orderly life. The picture book begins:

"Mister Bud had it pretty good.
Everything was just about right."

An experienced reader just knows things won't stay that way. And they don't. As soon as Zorro sticks his what passes for a snout into the household, things change. The two dogs have trouble sharing--toys, favorite sofas, food dishes, well, pretty much everything. Luckily, the two quickly realize they have something in common--they both have the same routine, and doing things with a buddy is much more fun than doing them alone.  Soon the pair are terrorizing the neighbor's cat on their daily walks and napping on the same cozy rug. In short, they become best friends. 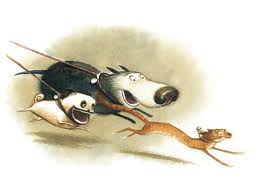 Carter Goodrich, the author/illustrator, was the lead character designer for Despicable Me, and his talent for showing each dog's personality in the art is evident. Mister Bud is the epitome of a contented dog enjoying his doggie lifestyle until Zorro arrives. And Zorro is the quintessential pug. Little in size but with a big dog's personality, Zorro doesn't let any creature, no matter how large, get anything over him. (I confess here that I am the proud owner of a pug and can attest that Zorro's portrayal rings true.)

My only quarrel with this delightful book is that the conflict between the two dogs is over almost as soon as it starts. I'd have liked there to be a bit more of a struggle before the two learn that joining forces is always better than going it alone. But that's a small quibble. Kids will enjoy reading about this mismatched pair who discover that even when everything is just about right, it can still get better.

Say Hello to Zorro!
by Carter Goodrich
Simon & Schuster, 48 pages
Published: 2011
Posted by Catherine at 9:20 AM