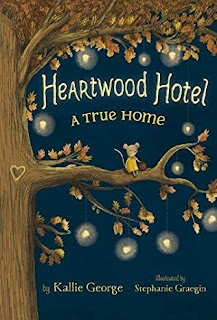 There's something irresistible about tiny animals making their way in the cold, harsh world. We meet out heroine, Mona the mouse, as she scurries for shelter through the woods in a storm. An orphan, Mona is on her own and so when she stumbles upon the Heartwood Hotel, a place of refuge for small animals located in a tall oak tree, she is grateful to be hired as a maid. But before she is accepted into the bosom of the Heartwood Hotel staff she must prove her worth, especially to Tilly, a squirrel who goes out of her way to give Mona a hard time. But Mona is determined to win over Tilly and the others and she does so in a most courageous way.

Although the story takes its time to getting started, when the action picks up, readers are sure to be pulling for Mona as she slowly makes a home for herself at the hotel. The details of this woodland wonderland are thoughtfully imagined. In the hotel, chairs are crafted from twigs and lined with moss, pots bubble with acorn mash and sweetgrass stew, and Mona wields a tiny broom, a dried dandelion turned upside down.

A sequel, The Greatest Gift, is the second book in the series.

Stand Up and Sing! 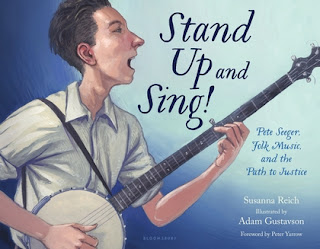 Seven or eight years ago, when I lived in Beacon, NY, I wandered down to the riverfront where a local festival was taking place. As I strolled along the wharf, I heard a familiar voice singing to the strums of a banjo. It was none other than Pete Seeger. He wasn't up on a stage--he was mingling with the people and encouraging them to sing along with him. Seeing him perform was a highlight of my short time in the Hudson Valley.

Susanna Reich has undertaken to write a picture book biography about Pete Seeger's long and eventful life, a formidable task. In his 94 years, Seeger experienced the Great Depression, fought in WW II, was blacklisted during the McCarthy years, agitated for civil rights, protested the Vietnam War, and worked as an environmentalist to clean the Hudson River. In Stand Up and Sing!, Reich guides the reader through Seeger's many accomplishments, the common thread tying them together being his love of music. The book moves along at a brisk pace, but Reich does slow down to highlight some of the especially dramatic moments of Seeger's life. For instance, Seeger's experience at the 1949 Peekskill Riots, when mobs attacked him and his family, is given its own spread. Reich ends the episode with a telling detail--Seeger kept two of the rocks that were thrown at him and cemented them into his fireplace, a reminder of "how important it was to stand up for his beliefs--and to never stop singing."

Adam Gustavson's moody illustrations capture Seeger's unruffled personality and evoke the grittiness of the times. An inspiring foreword by Peter Yarrow will perhaps resonate more with adult readers than children. An Author's Note and Selected Sources complete the book.

Stand Up and Sing!
Pete Seeger, Folk Music,
and the Path to Justice
by Susanna Reich
illustrated by Adam Gustavson
Bloomsbury  48 pages
Published: March 21, 2017
Posted by Catherine at 12:42 PM 6 comments:

Junk Food for the Brain 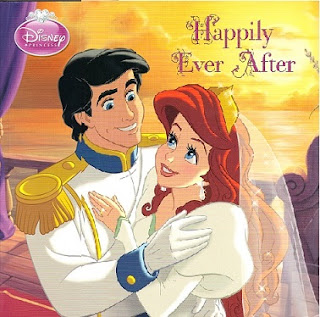 Gabriel Roth has a thought-provoking article on Slate: "My Kids Read Only Subliterary Branded Commodities. Yours Probably Do, Too!" His premise, which I don't disagree with, is that left to their own devices, kids probably won't select the literary award-winners beloved by parents and librarians. Instead, they'll head straight for books with licensed characters.

This is especially true for beginning readers. For every Elephant and Piggie or Frog and Toad, there are thousands more Meet the Angry Birds (really?). Where I part with Mr. Roth is his fatalistic attitude that there is little to be done about this. He seems to throw up his hands when his young daughter requests yet another reading of Ariel's Royal Wedding/Aurora's Royal Wedding.

When my daughter was young, I often didn't solicit her preference on which books she'd like to read. I knew that left to her own devices, she'd be drawn to many of the slickly packaged mass market items of the day, just like when grocery shopping, she pined for sugary breakfast cereals. (Don't worry, she didn't get them either.) So instead of cramming her brain full of junk, I'd go to the library or bookstore and get the books I thought she'd enjoy--which she usually did. She became a huge fan of Kevin Henkes, Roald Dahl, Seuss (The Sneetches, in particular), and even Marjorie Flack's charming Angus books (courtesy of our local library).

Did that mean that she never got to read Disney's Little Mermaid or an American Girl or two? No. Just as she was allowed a Kit Kat every Friday afternoon and got to choose an assorted cereal fun pack during vacation, she occasionally read "subliterary branded commodities." But I didn't keep them in the house.
Posted by Catherine at 10:05 AM 2 comments: 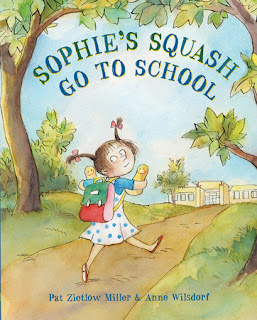 Sophie is back and so are Bonnie and Baxter, the two gourds that became Sophie's friends at the end of Sophie's Squash. In her latest adventure, Sophie tests the social waters as she maneuvers the first days of school. Although her parents assure her that school will be fun, Sophie is certain that it won't be. And of course her prediction comes true, especially when some her classmates wonder if Bonnie and Baxter are edible.

Sophie's rough adjustment to school is made even harder by Steven Green. Cheerful Steven isn't a bully. He just wants to be Sophie's friend. But Sophie doesn't want friends and rebuffs his overtures. She already has friends, she tells Steven, and shows him her squash. Sophie fights the good fight against Steven's attempts to become her friend, but she finds the classroom especially lonely after she temporarily says goodbye to Bonnie and Baxter. Now friendless, stubborn Sophie still resists the ever eager Steven. Events come to a head when Steven inadvertently tears Sophie's drawing of Bonnie and Baxter. How Sophie and Steven work out their differences and become friends will delight young readers and show them that "sometimes growing a friend just takes time."

Zietlow Miller's charming story is sure to strike a chord with readers who will soon be facing their own first day of school and all the worries that big event can bring. And Wilsdorf's illustrations are crammed with whimsical details for readers to ponder. Sophie's messy yet creative bedroom alone provides valuable insight into her character. 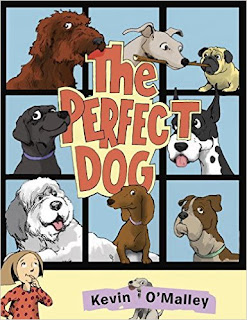 Today's post is about two picture books for dog lovers. Count me among the breed. My best friend--a pug--just turned 15. And according to The Perfect Dog, I didn't find Pablo, he found me. Perfectly true. Pablo was the only pup of the litter who kept coming over to make friends. It was love at first sniff.

The Perfect Dog is narrated by a girl who has just been given permission to get a dog--any child's dream come true. In the course of the book, she expounds on what that perfect dog should be and takes each trait to an amusing conclusion. For instance, when "the perfect dog should big...bigger...biggest," the illustrations show her with a chow, a German shepherd, and a Saint Bernard. Then there's the kicker: "Maybe not this big." And there she is with a Great Dane resting its giant paw on her. The pattern continues with other adjectives (small, long, etc.) and other breeds of dogs. The book concludes with the girl going to get her perfect dog only to have the perfect dog chose her. Pablo would approve.

The Perfect Dog
by Kevin O'Malley
Crown  40 pages
Published: May 2015 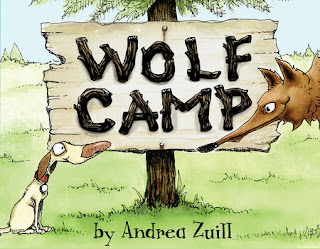 Next up is Wolf Camp, a picture book about an engaging mutt who is proud of his wolfish origins. Wondering what it would be like to live like a real wolf, he gets his chance to find out when he spots an advertisement for Wolf Camp in his bag of kibble. He spends a week at the sleep-away camp learning how to mark territory, howl, track, and hunt. Zuill's humorous illustrations capture the canine campers attempts at mastering these skills. (My favorite shows Homer taking a whiz on Fang, a wolf counselor.) Like human campers, Homer struggles with homesickness and the food (it has hair on it). But by week's end, he has earned his honorary wolf certificate and made friends. And that's something to howl about. 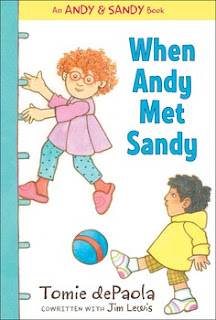 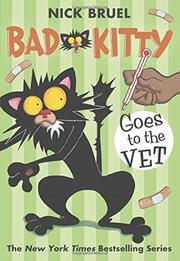